One year after my previous trip, I repeated the opportunity to visit Chris, a friend from my undergraduate days, and Adrienne, his wife.

This time I came prepared with one request: that we visit the yellow cliffs popularized in the television series Broadchurch. Sometime in the intervening year I had watched and, really, become attached to that scenery. As one of the characters says,

It is gorgeous, and, I confess, once again life imitates art.

One way (motor vehicle) or another (train + bicycle), we had at least five outings, each beginning in Bournemouth, where Chris and Adrienne live:

Previously, I’ve written about the Isle of Purbeck (which is not an island), a wonderful place. It includes, also, the Old Harry Rocks, which can be seen across the water from Bournemouth.

After driving past Studland, one can walk to the rocks following a portion of the South West Coast Path.

The South West Coast Path is a 630 mile trail that follows the coast from Minehead, Somerset southwestward and eventually east to Poole, Dorset (near Bournemouth).

The Old Harry rocks mark the eastern edge of the Jurassic Coast. Suffering from jet lag and Chris’ indisputably indefatigable nature, I wasn’t clear on which rock was which of the “three” that comprise Old Harry Rocks. Actually, the brilliantly white chalk cliffs impressed me as much as the brilliantly white rocks, except that I had to stand on the cliffs and therefore couldn’t see them as well.

When I looked on the world wide web (happy 30th!) to clarify the identity of the rocks, it began to appear that nearly everyone writing about and photographing them also suffered from jet lag.

One page by Ian West stood out as being truly informative. It is well worth viewing. In particular it shows a 2009 photo next to a 2015 photo, with the result that one can see how quickly these rocks are eroding.

Old Harry is a cylindrical stack. Nearby is Old Harry’s wife, a stump resulting from severe erosion, a cautionary tale in itself.

One day we caught a train to a town called Brockenhurst, and from there we rode bikes to Beaulieu (rhymes with Julie). The dirt roads in the New Forest (~1066 AD) were both enjoyable and their numbering fully confusing, so much so that we arrived in Beaulieu sans photos.

I did, however, document that laudatory train-bike experience in a different web log called Person versus Automobile.

In Brockenhurst we bought a map and went directly to St. Nicholas’ Church.

It was there my host, Chris, after elaborating on the age of the yew tree, attacked me with its berries. Here’s the 45-second footage:

Like the New Forest, touched upon above, the town of Romsey is in Hampshire County. Chris included me with a mini-bus load of English-as-a-second-language students for an outing to Romsey that featured two major stops: Mottisfont Abbey and Romsey Abbey.

In American English, the phrase “moot point” is almost always dismissive of something of no consequence (of so little consequence that the misnomer “mute point” occurs). Mottisfont Abbey derives its name from the Anglo-Saxon “moot” (meeting) and “font” (spring, which is still active on the grounds of the abbey). In other words, a British moot point was, and in rarefied ways remains, a point sufficiently significant over which to convene a meeting.

Originally a Medieval priory, in the 18th century, the building was converted into a country house and called an abbey. 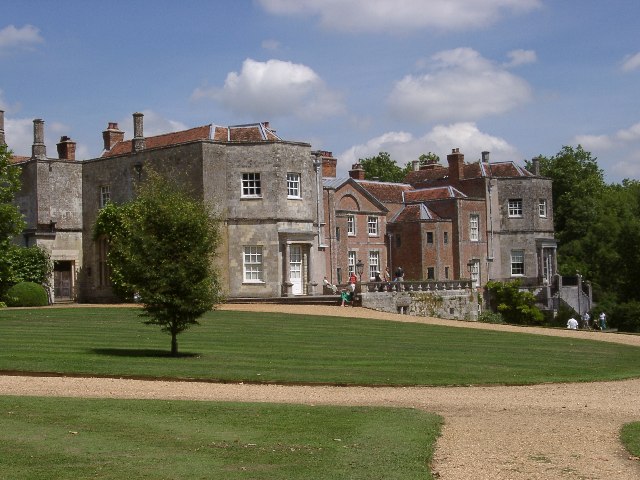 However, parts of the original structure were (and are) allowed to remain, including the cellarium, where beer and other staples were stored.

In the 20th century, the Russian mosaicist, Boris Anrep, contributed several mosaics both inside and outside, this one being of an angel.

Afterward, we stopped at Romsey Abbey. Most fortunately—and I do not know if my host who plans well had planned this—the artwork of Peter Eugene Ball was on display. Specializing in Christian artwork—particularly madonnas in this case—with a distinctive African bent, his statue of St Ethelflaeda was perhaps the most fitting since she was an abbess of Romsey.

On this day we drove west, with stops at Lulworth Cove, Stair Hole, Durdle Door, West Bay, and Lyme Regis, known by some as the Pearl of Dorset, but to me as the point where my gallant and generous hosts had exhausted my stamina, with the result that this travel log ends with a single photograph in Lyme Regis.

When we made it to the other side, we met Adrienne on the summit, where she was nearly blown away.

We walked along the beach toward the west of Durdle Door, out of sight of the other sight-seers. Here, Chris spotted a couple of crab traps that looked fully abandoned and yet had live crabs in them. One of my fondest memories was the rescue he and Adrienne performed.

On a civic-duty roll by this point, when he had climbed up the hillside in order to hike back to the car, Chris had his pockets stuffed full of trash.

After some sweet yet undocumented stops, we arrived in West Bay, the town fictionalized as Broadchurch. One can go into the flea market and, along with unrelated objects, obtain a DVD of Broadchurch and a miniature plastic dinosaur, the latter combining the geological reality of the Jurassic Coast with the movie about the Park.

We drove on to Lyme Regis. We walked along The Cobb, the sea wall that showers one with spray. Afterward, we had a healthy portion of fish & chips, happily with more fish than batter. And that is a good note to end on. (Many thanks to my incredibly informed and inventive hosts.)