In the Madrid-Barajas airport, you cannot find out certain gate numbers until you get to Terminal 4 (T4, boasting “70 million passengers per year”). There you find T4S is set aside for countries, such as the US, that lie outside of the Schengen Area, the 26 EU countries that abolished their passport requirements. At T4S, you find, you hope, the H-J-K concourses, and only then can you learn the gate. END_OF_DOCUMENT_TOKEN_TO_BE_REPLACED

This guest post is by Linda Grounds, née Burkhardt. It arose from her observations while on vacation in Hawaii. – Louis

The view was breathtaking.

A code of silence, unwritten yet understood, quieted the tongues of the vacationing balcony dwellers. Stilled, in reverence to the ancient emerald cliffs crowned with rainbows. Hushed, so that bird songs floated above a soft ocean roar. Whispered, to preserve rare moments. A whale spouting, a pod of dolphin playing, a turtle shadow beneath the sparkling foam.

For 12 days the code was unbroken.

His voice was deep, commanding, and loud. Coming from the balcony next to ours, he was on speakerphone, booming and brassy. A tourist acting like a tourist. I creased my mouth and shook my head. How gauche. Glued to my balcony chair, I sat with nothing else to hear but his blustery conversation.

“This is someone who does this all the time,” my husband, who sat across from me, whispered. “He’s non-stop. Can’t stop working on vacation.”

Our next-door neighbors had just closed on some beach-side property, a condo. But, where? I couldn’t tell. Booming voice, I’ll call him, was very excited and thanked the man on the phone for helping get it done. The wife exclaimed notes of gratitude, yelling toward the speaker phone. The conversation continued, reviewing how many months it has taken, how impossible it looked, how it never would have happened without the help of mystery man on the other end of the line. Mystery man closes by saying they will celebrate soon and overlook the beautiful water from the new condo.

I sat. To myself, I said: “Here’s a rich fat cat, who is on vacation in Hawaii, and buying beach-side property … somewhere. He probably sees beaches all the time, which might explain his disregard for the sacred code of silence followed by the rest of us.” I excused myself, quietly reveling in righteous indignation, and went inside.

Some time later, I came back out on the balcony. Booming voice was still talking, but to someone different. Great. As I sat down, my husband whispered: “He’s dying of cancer, he’s on a wait list for a new liver.” If jaws physically drop, mine did. Chastened for my former response to the man next door, I listened. Speaker phone again. This time he was talking to a friend or as he said, “my brother from a different mother.” Evidently, the two of them are suffering from a rare and deadly genetic condition.

“How long do you have?”
“About a month or who knows.”
“What’s Sally say about it?”
“Oh, she is acting as though I have forever.”
“Well, we don’t know, do we? I’m here in Hawaii for a month. I thought one ‘last hoorah’ before I go back for an endoscopy. I have a bunch of tests lined up the week I get back.”

The two discussed their doctors, the good ones, the bad ones, and the home nurse who is “just like a daughter.” Tender words were exchanged with soft chuckles and intimate rapport.

Silence. I had just witnessed something equally as beautiful as the view.

“Be kinder than necessary, because everyone you meet is fighting some kind of battle.” – J.M. Barrie (Author of Peter Pan)

This post is about my third trip to Zacatitos; my second trip here and my first trip here.

That I am traveling at all is a testament to the decline of covid–19 in some parts of the world.

Yes, I must like this place…as well as el yerno, Don, y la hija, Sarah, who invited me—el suegro—down! (¡And that is the last of my Spanish through which you must suffer!)


One urban myth is the “midlife crisis”: the 45-year-old man finds himself as Dante did:
When half way through the journey of our life
I found that I was in a gloomy wood,
because the path which led aright was lost.

Or, as the Paul Simon put it, the man asks, “Why am I soft in the middle?” The man might consider having an affair but settles in the end for a red sports car, driving his way gracefully into old age. It’s a myth because it seldom happens that way. The plural of crisis is crises. The man in the gloomy wood makes momentary advances but as he looks down the road, he sees those who came before him falling off the end of the road into oblivion, while he personally feels shock waves periodically as time moves forward toward King Lear‘s “promised end” where

The weight of this sad time we must obey;
Speak what we feel, not what we ought to say.


For me, what was it? Too many beers or too many blood clots? Moving upstream from all that, it was what my neighbor Ben said about the pandemic, particularly if one worked at home and was both at risk and living alone: it taught us to live as if we were depressed, cut off from others, locked up in our homes…shut-ins.

So it was I found myself in Zacatitos for a third time, graciously invited down by Don, who will read this and should have no doubts that he is among the most gracious hosts numbered among men.

In such an elegant setting, I alternately stayed in my room with my shock waves and strayed outside with the ocean waves.


As for the shock waves, I took comfort with Isaiah, not a person, but an ancient text that tells me over and over again that the desert shall blossom as a garden and that rivers will flow freely; that the hills shall be leveled and the valleys raised to create a highway for the redeemed who will look for their enemies, but will find none; who, even if they are lame, will carry off plunder; that the blind will see and the captives shall be set free; that no one in the city of God will say “I am ill”; who, when they wait upon the Lord, shall mount up on wings of eagles, running and not getting weary, walking an not fainting; who will find a messiah who suffers for them only to bring them to a place of peace, quiet, and resting, close to his heart.

I also walked with the burros.

Or looked at the variegated homes. 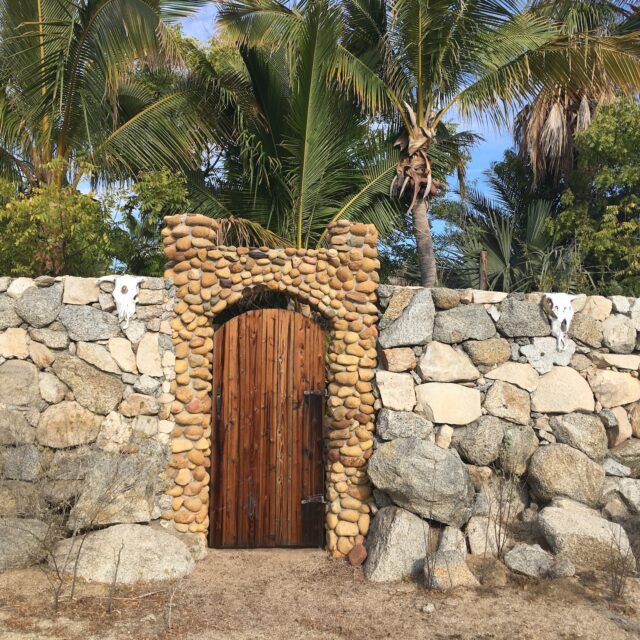 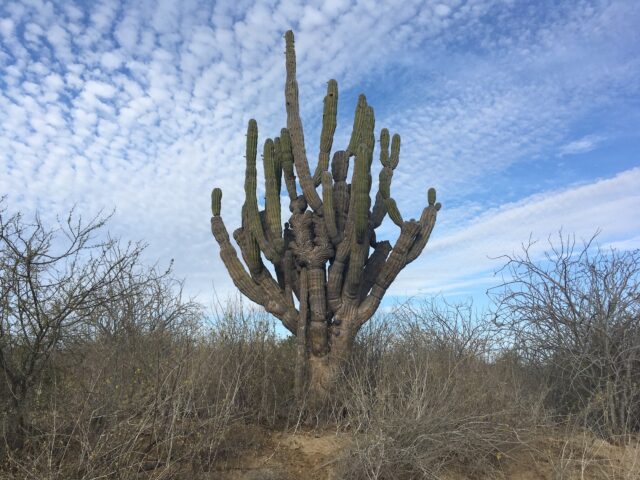 Or Don and Sarah in their swimming hole. 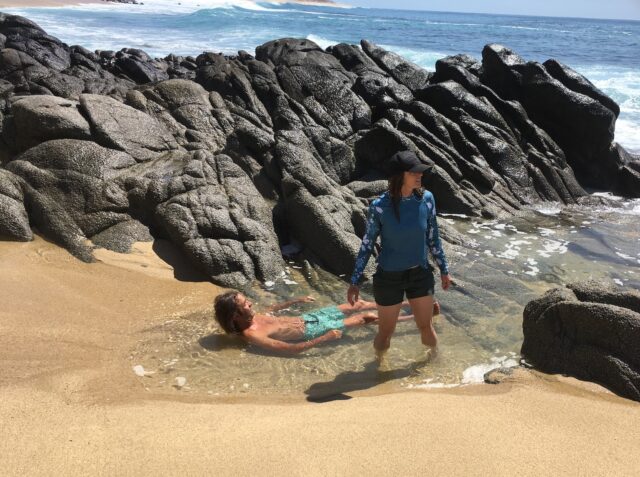 Which was accompanied by abandoned homes of salt water creatures. 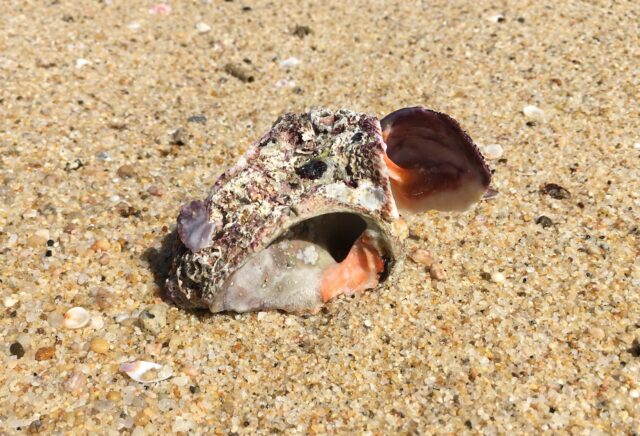 And, in the evening, I enjoyed the skyline. 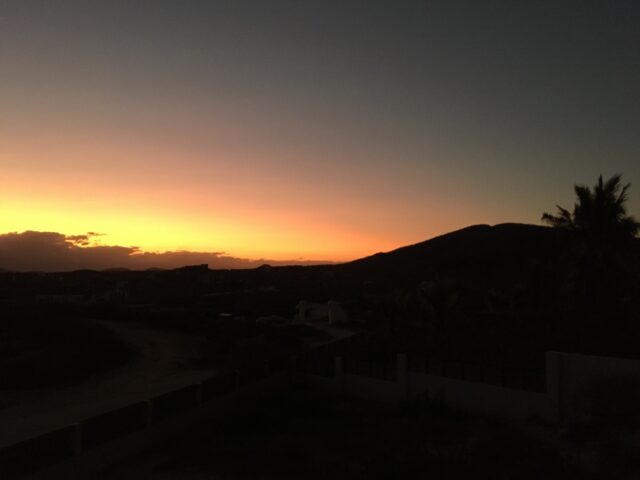 Nice as it all was, it would have been much less without the people.

It was these people that I one evening wanted to take out for dinner at a restaurant they liked, one that sat on the edge of Old Man’s Beach. They were surfing in front of the restaurant-hotel while I watched. If the restaurant started filling up, I was to get a table, which I did. I ordered a glass of “your house wine, red,” which I assumed to be the least expensive. It was truly the first Cabernet I actually enjoyed. So, thinking it’s cheaper by the bottle, I ordered our table a bottle, knowing that another couple would be joining the three of us later. Sarah & Don finally showed up, as did their friends. We enjoyed a fine meal, and when the check came, I discovered that “your house wine, red” was interpreted as “your best red.” Bottle: ~$100 USD. Funny, especially since on the drive over I said I’d never pay $10 for a glass of wine. The good news: I can appreciate a good wine! And so can Sarah, who also found it exceptional.

Getting on our flights wasn’t hard (for me) but was difficult (for Don): we all passed our covid–19 tests (a deal: $25 with results in a half hour), but there were various forms to fill out in addition to the standard paperwork. While I was drinking a latte, waiting for my flight, Don was refused entry, no matter how he re-did the paperwork, so—and do not let this become public—he did something like this: he pointed to the ceiling, saying, “Well look at that!”—and slipped around the guard to get to his gate. 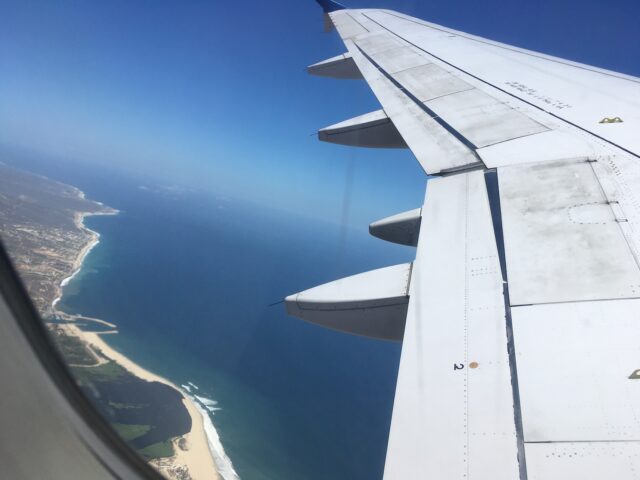 For a rough idea of geography (which, like most images, is clickable):